I will be attending the Toronto pen show this weekend.

I hope to see some of you there, specifically some members of the London Pen Club.  I have traded emails with some members, and I look forward to meeting some folks live.

I will give a preview of a new model pen that will be emerging very soon.  This pen will be called "The Pearl".

Within a week, I’ll make an official announcement, but for now, take a peek at what will come.

This pen will have options for TWO ink windows.  One below the section, and one within a blind cap that has been bored out to reveal the ink. 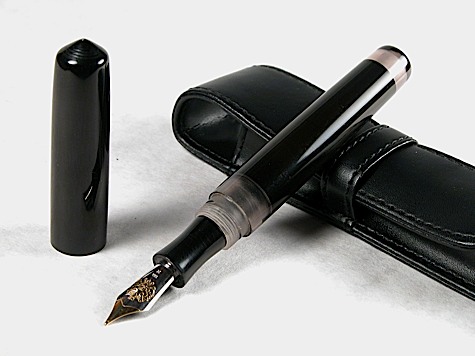 4 replies on “Toronto….and on the way, The Pearl…”

Two questions:
Is the pen an ED?
Does it have a clip?

Great looking pen Brian. I am always impressed with your pens.

What kind of finish do you put on your pens?
Does the Pearl’s cap post?

Yes, ED. I’m working on the clip now. If you want to check out the Fountain Pen Newtork, I’m about to post pics of the various clips and get peoples opinions.

//What kind of finish do you put on your pens?
Does the Pearl’s cap post?//

They get polished, and then some wax.

Fantastic looking pen. I really enjoy how the partially clear section above the threads is balanced at the top of the barrel. Nice!