Without a doubt, the best aspect of manufacturing custom pens is that my customers are always coming to me with new ideas for custom creations.  If I only did pens in a production setting, I think that it would be easy to get stuck in creative ruts.

Usually when I create a completely custom pen, I don’t bother with making any big announcement, but I think that this one deserves a little recognition for my customers who might appreciate the design.

A client of mine approached me with an idea for a custom double ended pen.  The idea was to have two separate ink reservoirs with two different nibs all in the same pen.  I really liked the idea, but I was worried about whether or not having two decent sized ink reservoirs would make the pen really big and awkward.  After about 3-4 prototypes, we came up with what I think really nailed the design.  See below…. 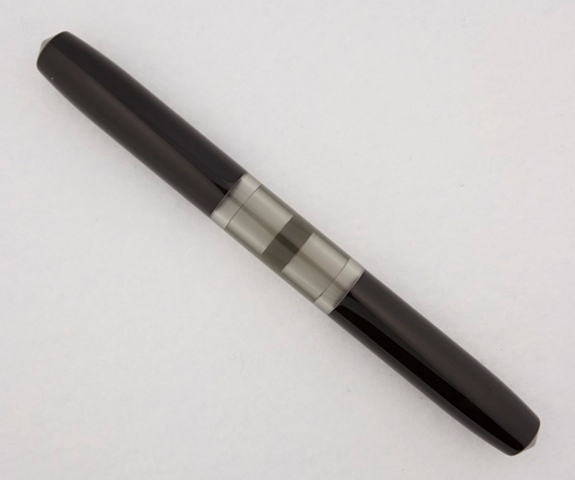 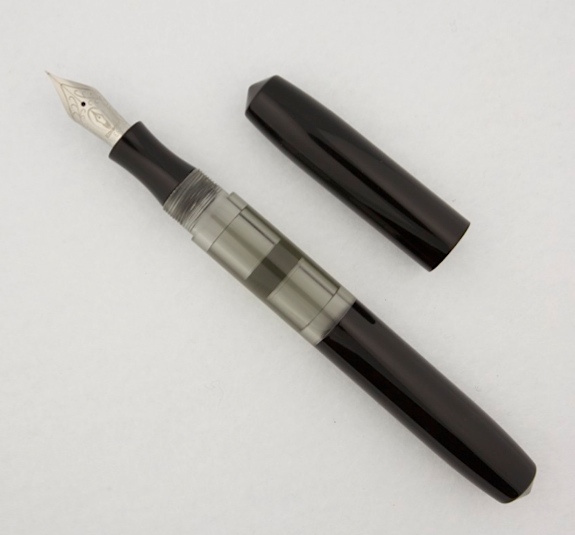 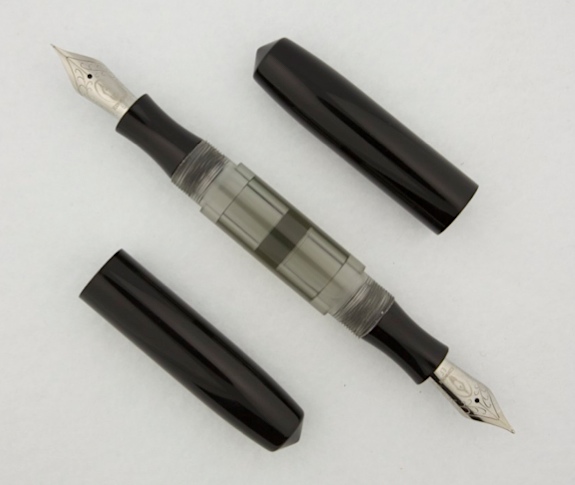 As you can see, the pen will be an Eyedropper filler only.  With the first couple of prototypes, we tried to make it long enough for cartridges, but this extra length definitely made the pen too long.  As is, this pen comes in at a touch over 6" capped.  I didn’t want to get much longer than this, so Eyedropper only was the best route.

But with a smaller design like this, how much will ink capacity suffer?  This was my real concern with this design.  It turns out to be no issue at all.  Each reservoir will hold 1.25mL,  In comparison, a converter holds a bit less than .5mL.  So even with these smaller reservoirs, the pen still holds nearly triple the capacity of a converter.  Almost 6 times the capacity if you count both reservoirs.  Not only that, but I could probably customize the interior of the reservoirs to hold even a little bit more.

One might ask about the inherent issue of an Eyedropper burping.  This should be eliminated on this pen.  The phenomenon of ED burping is where an Eyedropper pen will burp a small amount of ink at the very end of a fill, due to a very large ink reservoir.  When the fill gets to the very end of a very large ink reservoir like most eyedroppers, the pen can lose a little vacuum due to the air being compressible and "elastic".  Since these reservoirs are smaller, this should never happen with this pen.

The obvious benefits of this pen (besides the "cool" factor) is that you can have two pens in one.  Two nibs of two different tip sizes, and two different inks if you like.  Also visible ink reservoirs.

Here are photos of the pen next to a standard Pearl for comparison purposes. 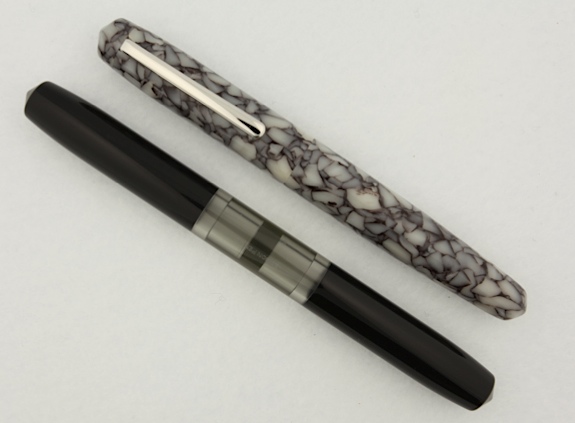 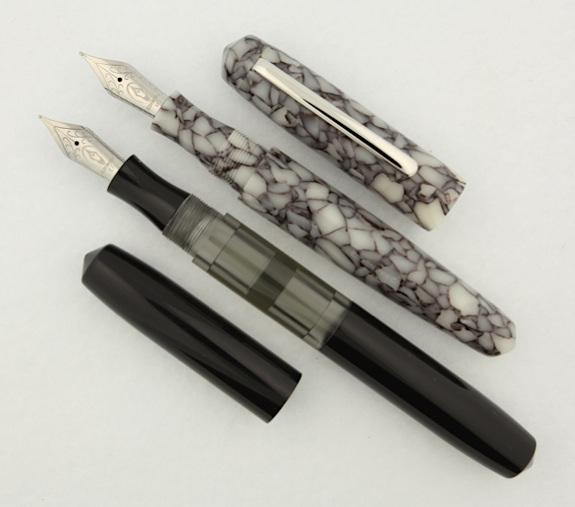 As you can see, the pen will be a little longer that the standard Pearl when one cap is removed, but not to the point where it would be unwieldy.

If anyone is interested in a pen of the same design, obviously the transparent ink reservoir can be any color, and the caps/sections can be any material.  And no reason that this needs to be based on the Pearl.  I don’t see why this idea couldn’t be adapted to any of our designs.

Thanks for the post on this pen, Brian. Looking forward to getting it and putting it through its paces. I’ll be using it with two different ink colors. Love how this turned out.

That’s very interesting. Would be nice with a signature nib at one end and a normal writing nib at the other.

Hi Brian, this is SUCH a pedestrian question, but lets just assume I love the concept, and get on to my boring query. In the pocket, there’s always going to be one nib pointing downwards. Is this likely to be a problem? Thanks

I’m going to do more homework on this, as having one nib facing downwards might be risk of ink spurting. For now, I’m recommend this as a desk pen until I do some testing.

This is great design and seems to be of comfortable size. Definitely a good desk pen, and also opens up possibilities like keeping different inks and/or different nibs. pretty handy.

My Danitrio pens tend to burp a little ink when the pen has been warmed in the hand for a while.

I’ve a couple old double ended Arnolds that have FP on one end and pencil on the other. When I first read the headline I thought this was what was coming. A FP and RB may be a great combo.

That is extraordinarily cool. I’ve always liked the combos, but I never use the pencil. This is better. Congratulations.

I know what I’m saving my Christmas and birthday money for!

I… I must save up for one of these!

I received this pen today and am completely enamored with it. Brian, you really outdid yourself with this one.

Can Thomas Hall comment on the potential for ink leakage with use as a pocket pen? Have you tried it? If not, could you be our test pilot with water in the inferior section? Thanks.

Yeah, sure. I’ll email Thomas now.
I’m in the process of making more of them now, and I’ll do more thorough testing on my own, as well.

Thomas mentioned that he’ll try to comment tonight. In the meantime, he did address this on the FPN thread…

As Brian mentioned, I’ve posted various impressions in the aforementioned thread on FPN. I haven’t had ANY issues with leaks or burping of ink at all, even when I emptied out one end and was flicking the pen to empty water out of it. I’ve never had any drips in the cap.

I had been using the pen daily at work and taking it back and forth. No issues for me. I love the pen!

Let me know if you have any more questions or if I didn’t answer your question, Bryon!

My question was addressed fully. Now the hard part, deciding materials and look. Thanks to all in the thread!

Carrying two pens is fine too! I’m not saying that this a panacea for the pen world. It’s just pretty cool! 🙂

I have carried my double pearl fountain for several months now. It is truly one of my favorites now. It quickly took the first slot in my daily pen case (3 slots) replacing other high $ pens such as Mont Blanc 146 and my M800 Pelikan. I have a med nib and a stub. The color is red tortoise which picks up wonderful light highlights mixed with dark swirls. It is semi demo, not not complete. I like this because demonstrators are generally messy in the cap and I don’t like to see that. Overall, I would not trade this pen for any other. Well, maybe that’s not exactly true. I would not trade it for any new production pens. Cannot say this is true for a few vintage models.